Railroad bridges are generally either made from Stone, Concrete, steel or wood. In North America stone and concrete are rarely used for very high bridge construction due to the difficulty of having to build tall timber centerings for temporary timber supports for the curved concrete or stone arches.

Nearly all of the North American railroads built bridges in steel or wood.

In the early days towering trestle bridges sometimes over 200 ft high and spanning lengths of a mile or so were not the norm but were also not uncommon. On the larger ravines the wooden trestle bridges were built because of the ease of getting the materials. Large numbers of trees were plentiful and the engineers had them cut and milled on site. Early timber bridges had their drawbacks, the main being that untreated timber only lasted 20 or so years and then sparks from the fire boxes would fall onto the structure and the dry timber soon caught fire.

On some logging trains the engineer would slow the train down and he and the fireman would jump off and let the train cross the rickety bridge and then they would run and catch up to the train after it made it safely to the other side. These wooden bridges were cheap to make and often construction standards
were very low and they could be replaced just as cheaply. Once a logging site was logged out the lines were just abandoned as the crews moved to the next site and construction of the railroad would start all over again.

A lot of smaller bridges that crossed small streams and medium rivers were also built of wood. Some of them were made from logs that had not
been processed in any way and then they were replaced with treated timber so that they would last longer. However in time on the main lines a lot of the wooden bridges and trestles were replaced with steel bridges and trestles or steel truss bridges. On some of the larger river spans the engineers built steel cantilever types on concrete pylons alongside existing bridges. The line was then changed over once these were completed.

The first HO scale wooden bridge that I built for this article is fairly simple and comprises two 6mm square beams 210mm long made of base wood
for strength and these were spaced 37mm apart with one spacer at each end glued in place. Then I cut rail ties from 3mm square balsa wood 50mm long and I needed 32 of them and glued these in place 3mm apart. Then I cut two top runners from 5mm square balsa and glued these to the outside edge on top of the rail ties. 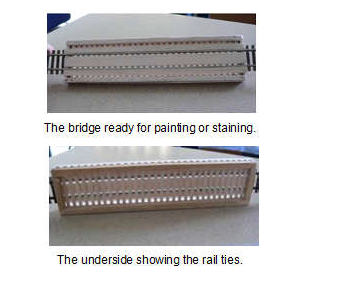 Next, once the glue had dried I removed the plastic ties from a spare section of code 100 Peco track leaving enough ties at each end to hold the track in gauge and glued the rail in place centring it on the bridge. From a sheet of 2mm balsa I cut a 14mm strip 219 mm long and glued this in between the rails making sure it was centred and the wheel flanges had enough room and would not bind on the wood thus derailing the train.

Next two 7mm x 2mm lengths 210 mm long were glued to the ties on the outside of the rail. I also scored the 2 mm boards with the back of the craft knife so that they represented narrower single boards. Now the bridge is ready to be sanded and either stained with a brown wood stain or painted brown using a matt water based paint.

Next I made the trestles that would support the bridge. This comprised of four piles cut from 3mm dowel held at the top by two 4mm x 50mm square balsa wood beams filed with a round file to hold the piles so that they joined in the centre and with everything glued in place and left to dry then painted with some river weed debris caught around the leading pile.

In order to help preserve the timber they soaked it in creosote which turned the timber black and then it was left to dry for awhile. However until they pressurized the process to force the treatment right into the wood the lasting time was not extended by very long, another ten years at the most.

In reality, as the timber dried out the black color would slowly disappear leaving the natural color of the wood to bleed through. The bridge shown has the wooden abutments added at each end and is now ready to be installed on my layout. With the mat black paint dry brushed over the brown to represent the creosote.

These were built over ravines, river gorges and valleys etc. and involved a lot of timber. The Bents or supports for the bridge were built of whole tree trunks for the earlier bridges and later milled timber was used, usually being milled on site. The timber was creosoted to help preserve it as stated earlier. When building one of these high trestles for your modem railroad it is best to make a jig so that each bent is exactly the same. The jig can be built from cardboard or as I have done from MDF board as per the photo. 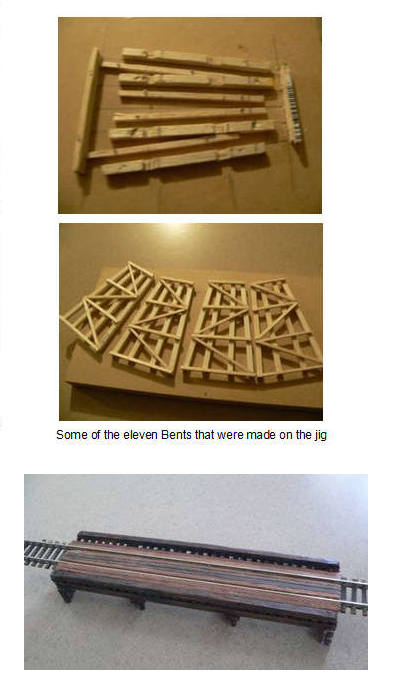 I needed to make eleven bents for my bridge and they are all exactly the same and it took just four hours to construct them all but they will be left over night so that the PVA glue will dry properly. For the risers I used 3/8 inch square balsa and for the bracing I used 3mm square balsa wood. This bridge will be 110mm high and modelled on the one that spanned Overman Pit where gold ore was excavated in the early 1900’s the trains crossed this pit as they entered Gold Hill depot.

Once the glue has dried properly these bents will be instaled on the layout and the rest of the bridge constructed. The side bracing would be glued in place, once the glue is dried then the deck and rail will be added. The whole bridge will be painted and weathered.

A model of Overman Pit will be constructed from plaster and painted showing the different layers of soil and rocks with shingle etc. being added as per a photograph I have.

Now days the pit has been filled in as the trestle had deteriorated to a state that was very unsafe and would not support the weight of the trains. Passenger only trains run on the line now, but in its heyday a lot of gold ore was taken to Carson City where it was processes and the gold extracted. Other freight and supplies were also transported by the trains but over the years with better road and larger and more powerful trucks the railroad struggled to attract more customers
and then people having their own automobiles even the passenger trains died a natural death. Now days the Virginia and Truckee railroad is a tourist attraction running trains two or three days a week or more if bookings warrant them.

The jig mounted on a piece of MDF the recesses in the balsa are so the glue will not come into contact with the jig, making it easier to remove the finished bent.