Buy Individual Buildings or Get All 3 and SAVE 48% 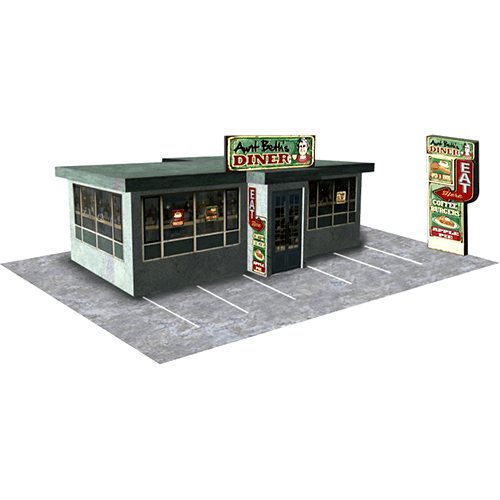 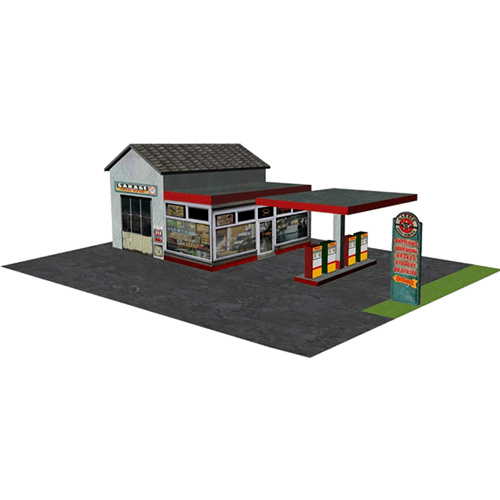 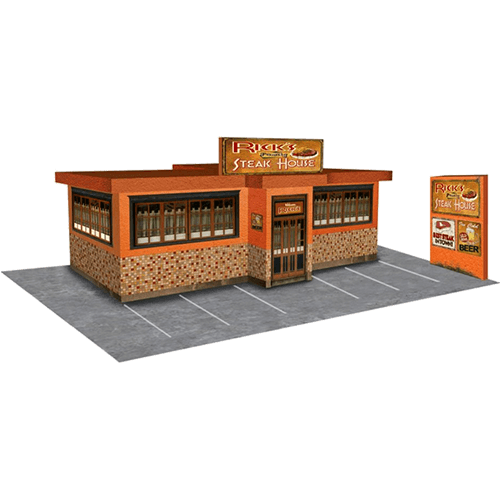 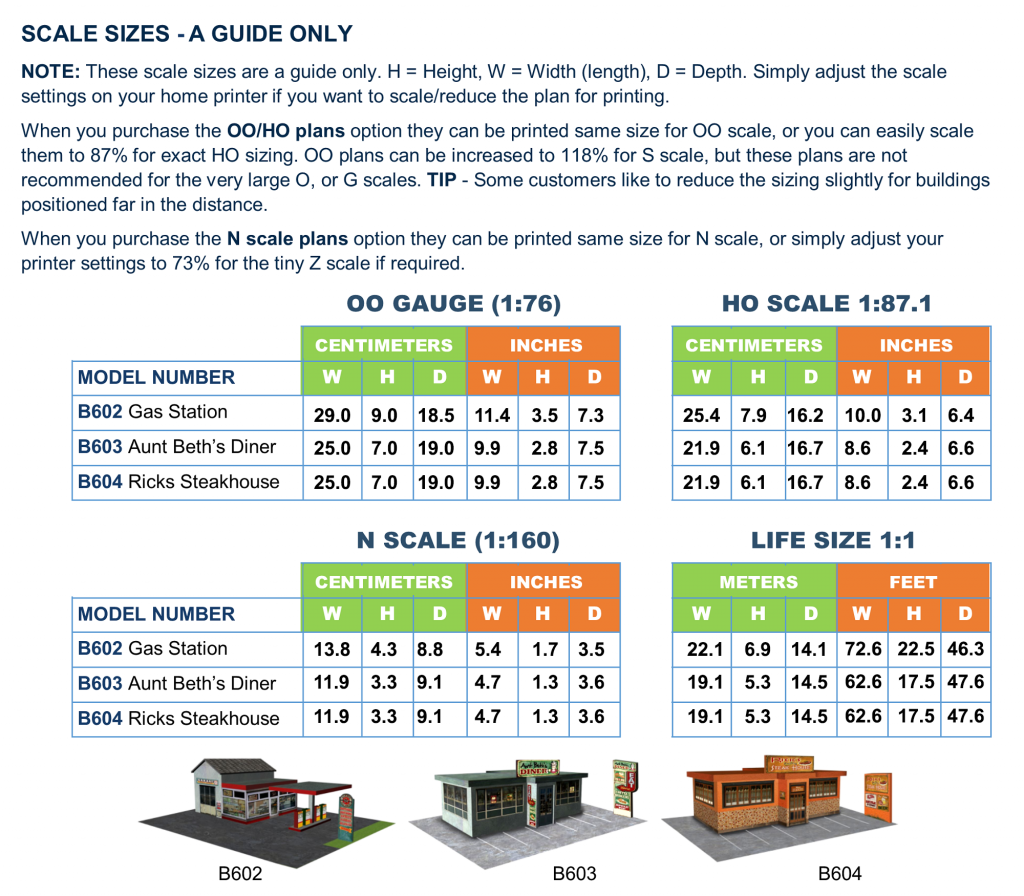 Step back in time to 1950’s or 1960’s America when life was a lot simpler and slower paced – some would call it idyllic. Bring to mind nostalgic memories of rock ‘n’ roll playing on the jukebox in the Diner, or stopping to fill up the auto at charming old-world roadside gas station. You might have just been an “ankle biter” at the time, but that shouldn’t stop you from recollecting and recreating a nostalgic roadside or small town scene from yesteryear.

Here’s How To Create Your Own Uniquely Realistic Scene For Your
Model Railroad… That You Can Be Proud Of Displaying… Even If
You Have Never Downloaded, Printed, And Constructed Your Own Model Buildings!

These 3 “period-style” scale retro model buildings are reminiscent in appearance of many real world structures common throughout the USA in the 1950’s and 1960’s. The plans to make these scale models are
inexpensive, easy to download, fun to build, and wonderfully realistic when constructed. Here’s how:

The traditional American diner was, and still is, a home away from home for many US citizens. That’s why including a period-style American Diner or steakhouse as part of your 1950’s – 1970’s model railroad scene works so well. You can create a replica scene evocative of the character of old world America recollective of when the typical American diner was a place to socialize, have a feed when working the late shift, or just to enjoy a meal or milkshake any time of day. Old-fashioned American diners are a US icon that  The 1970’s saw a resurgence in traditional American Diners. The 70’s was considered by many historians to be a decade of general uncertainty: values and morals in American society were changing, and most of the USA was in the grips of transition. It is not surprising that many folk looked to past traditions and trusted institutions for stability, which in turn led to a demand for the familiar styles considered classic in appearance. At the time, many businesses were struggling to compete with newer trends especially in the fast food industry, but then suddenly there was a “eureka moment” when manufacturers and retailers discovered it could be profitable to produce or supply foods remindful of yesteryear. Characterful American diners that imitated the original style and feel of traditional US diners came into their own. So, even though this scale model of Aunt Beth’s Diner is modeled on a distinctive 1950’s or 1960’s American diner, it might not be out of place on 70’s style model railroads. The scale model diner can be printed out on paper and built from cheap (or free) cardboard to HO scale, or to OO scale, and N scale.

The Same Ambiance of 1950s Era American Steakhouses Lives On

The printable scale model of Rick’s Steakhouse is reminiscent of many eateries across the USA in the 50’s, 60’s and even the 70’s and later. In the real world, many US restaurants still operating in the 21st
century are keeping the retro style and feel of traditional American steakhouses alive, where it is still possible to order steak and potatoes, creamed spinach, and a beer from the menu. Many Americans still flock to these carnivorous eateries specialising in serving piping hot beef steaks, lamb kidneys, mutton chops, and sizzling strips of bacon, alongside traditionally cooked baked potatoes, hashed brown potatoes, fries, or onion rings. Finish your meal off with a generous serving of cheesecake and you’ll know you’ll have experienced dining at a traditional steakhouse table. Although the orange stucco and tile exterior of the Rick’s Steakhouse model building might be considered a bit retro by today’s standard, bright colors were quite the thing a few decades ago. The plans to make the characterful Rick’s Family Steakhouse model building can be downloaded, printed, and the model constructed to OO gauge, HO scale, or N scale. The signage on the model building is recollective of 1950’s, 1960’s, or 1970’s America. The scale building model can be made for a railroad or diorama scene by using paper and cardstock.

Gone are the days of hearing driveway bells as drove over the strip that triggered a bell to ring as you entered or exited a gas station. And, for the main part, there are no longer uniformed mechanics, free road
maps, or attendants ready to pump petrol and clean your windscreen. Call me old-fashioned, but not all things today are for the better. Fortunately you can capture a reminder of the past (perhaps better days), by constructing your own scale model gas station straight out of yesteryear. Plans for the gas station model are downloaded via the internet (what ever happened to delivering mail by pony?). The retro designs are pasted (sounds more old fashioned than using Super Glue or spray adhesive) on to cardboard, where they are then cut out and joined together. You can make an HO scale gas station model, or construct the model building to N scale or OO gauge. Position the miniature gas station on your model railroad, add some scale die-cast vehicles, plastic people, and you are on your way to recreating a scaled-down scene from 1950’s, 1960’s, or 1970’s America.

These days, gas stations, or as they were once upon a time called “service stations, more closely resemble convenience stores without much in the way of service. There is typically no mechanic on duty, no service bay equipped with all the tools required for oil changes, brake replacements, or equipment for complete engine overhauls. However, to be fair, automobiles are far more reliable these days. So, gas stations posting an old-fashioned ‘Mechanic on Duty’ sign out front would indeed be a rarity in todays day and age.

No service means no uniformed attendants, or as they were often called ‘pump jockeys’ , so you will no longer see smartly-dressed attendants complete with a hat and bow tie. There will be no uniform shirt carrying the company logo stitched to the breast pocket, with the attendant’s name embroidered on the other. In times gone by, pump attendant would have a roll of fives and singles in their shirt pocket so they could give change. However, that’s not stopping you from painting a uniform on a plastic figurine resembling a pump attendant to work at your scale model gas station complete with die-cast scale model automobiles in the scene.