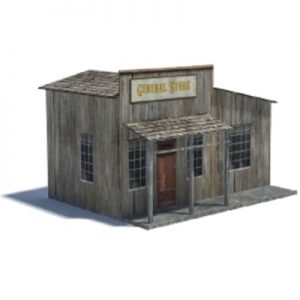 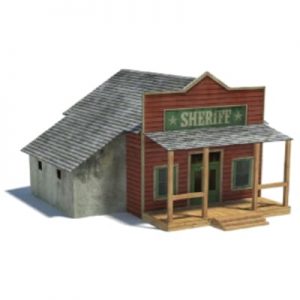 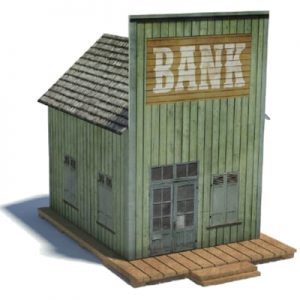 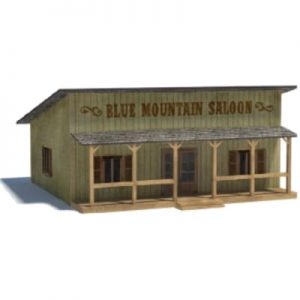 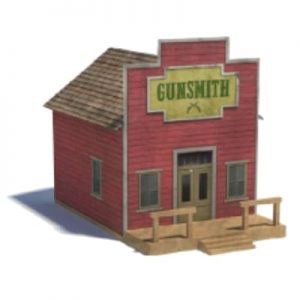 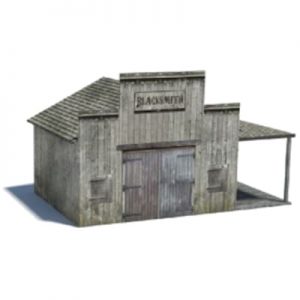 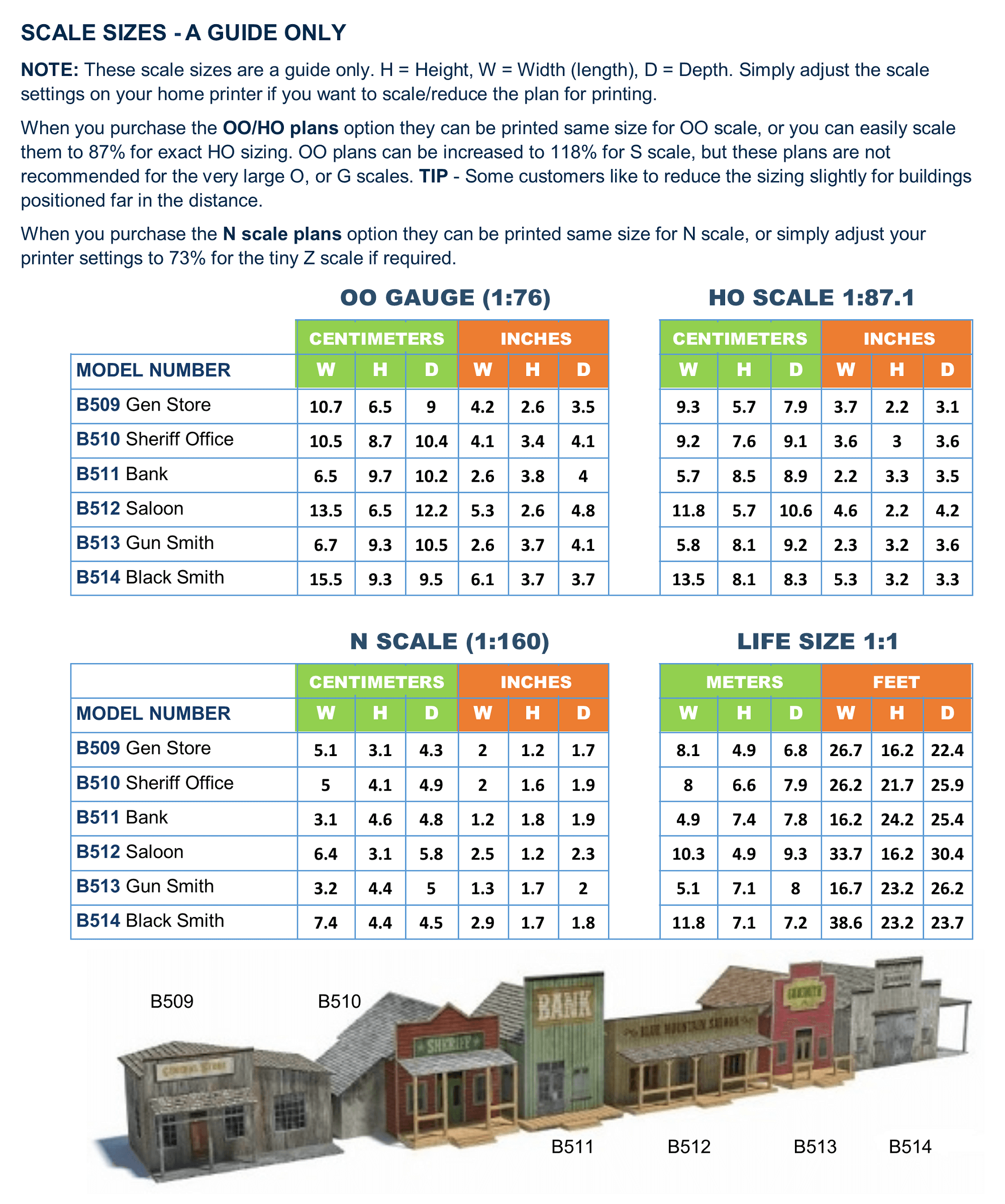 Plans for old west buildings can be purchased from this website. After purchasing and selecting your scale (OO / HO scale, N scale) download the paper plans for your old west buildings, print them out, and assemble them using disused cardboard (old muesli box or similar).

Some people call them cardstock kits or cardstock models, because you put them together using cardboard, but we just use the words model buildings to describe these printable paper models. Basically you download the paper plans or templates in printable PDF format to your computer and then print them out and glue them onto some cardstock or cardboard (you can use the card from a cereal pack). The plans are then ready for assembly.

You can save the PDF file to a disk or removable USB stick if you choose. That way, at a later date, you can print out more copies of the plans for old west buildings you purchased if you want to. This doesn’t breach copyright rules as long as you don’t sell or give away the plans for old west buildings to someone else. That would be a clear legal breach.

These old wild western structures will look great when positioned on a layout with track, trains, scenery, people, bridges, tunnels, and a backdrop helping to bring the scene to life.

Hollywood and the old cowboy movies and TV shows typically had mainly white rugged guys roaming in posses or farming on the land. It might therefore come as surprise to learn that more than 50 nationalities were immigrants to the US in the old wild western days of 1865 through to 1895 – the period typically called “Wild West” times. People from all around the world came to the US to start a new life or to strike it rich in the minefields.

In just the sate of Wyoming, there were 56 nationalities in a population of 10,000 people that was made up of various nationalities including Chinese, Germans, Finns, Swedes, Slovakians, Russians, Irish, Ottomans, Italians, and Norwegians among others.

With this in mind, coupled with the images you probably have in your mind from movies depicting old wild western times, the possibilities for building a scale model railroad depicting an old wild west town are endless. This website also has 13 plans for old west buildings as well a nice range of old mining town buildings all available as paper plans downloaded over the internet. The paper models can then be printed to scale and put together using cardboard from old cardboard packing found in the kitchen cupboards or pantry.

In geographical terms the old Wild West was the part of the America to the west of the Mississippi River. Historically, the old wild west days were represented the period from the latter half of the 19th century (generally 1865 to 1895) through to the early 20th century. So that is a reasonable date range in which to set a model railroad display that is to feature models of old west buildings.

The migration into the wild west was not an easy undertaking by today’s standards. The pioneers opened up the frontier in the face of extreme hardship and bravery, because the land and environment was harsh and migration and living on a farm or in a town in the wild west of America was often very dangerous and violent. The early settlers forced their way towards the Pacific where they met resistance from the Native Americans (in early days referred to as “redskins” or “Indians” although it is not politically correct these days to use those descriptions. Native Americans is the common terminology. And, it should be noted, there was extremely violence on both sides – the natives trying to protect their land from the settlers and miners, and the settlers trying to make a new life for themselves.

The culture of violence was common, as was a break-down of law and order. For many it was a daily struggle to survive in the old wild western-town days. The ongoing tensions between settlers and the natives ultimately resulted in what’s known as the Indian Wars. There were some gruesome atrocities with a heavy loss of life and severe injuries on both sides. The wild west was truly wild. If you are planning an old wild west scenic diorama the plans for old west buildings are available for download from this website.

Many early settlers also migrated westward along what is known as the Oregon Trail, the area that stretched from Independence in the US east, right to what is called Oregon City in the US west.

The journey was long and hard and at times very dangerous. A lot of settlers died on the way. With a lack of good medical supplies or help, many succumbed exhaustion, or illness on the way usually on horseback, in a covered or open wagon. Many more settlers were killed in conflicts between themselves and the Native Americans.
Thanks to numerous movies of the wild west we all remember cowboys and the big herds of cattle they farmed on small farm and expansive ranches. The huge cattle herds were farmed on land where buffalo once roamed. The cowboys would often come into town and spend their money on Whisky and women, or gamble. This in itself caused problems for townsfolk and lawmakers alike. To prevent violence and shootings the sheriff or marshal would often need to jail the cowboys until they sobered up.

In the storied and colorful history of model trains, there is a special place for the N Gauge steam engines. Even today there are many N scale steam engines along side the many diesel engines on the market. One of the first that came out of Europe was the Arnold Rapido 0-6-0T Steam Switcher in the 1960’s. This was followed by many other steam engines.

Toward the end of the 1970’s Con-Cor was selling a Rivarossi steam engine that sported motors and drives that were much improved. Con-Cor continued to offer a wide variety of N gauge trains including many with steam engines and manufactured by Mehanotehnika, Rivarossi, Kato, Fleishmann, and Roco. For example in 1980 they released the popular 4-8-8-4 Big Boy Steam Locomotive, and the Con-Cor Southern Pacific 4-6-4 Steam Engine.

Atlas Tool Company then began to distribute a full line of N gauge trains in the late 60’s with both steam and diesel engines made by Mehanorehnika and Ricarossi. Atlas also offered steam switchers in this same time frame including the Saddletank Switcher Atlas 0-4-0 Steam Switcher (Rivorossi) and the Tank Switcher. The Atlas RSC2 engine was made by Mehanorehnika as was the Atlas EMD SD45.

By 1977, Rivorossi was introducing a new crop of steam engines that included the 2-8-4 Berkshire, the 2-8-8 ELS, the 2-8-2 Heavy Mikado, 4-6-2 Heavy Pacific and the 2-8-4 Bershire. Then they sold the Dockside Switcher and the rerelease of the SW 1500 that was manufactured originally for Atlas. Some of these engines used Roco and Atlas tooling. The Rivarossi NYC Dreyfuss Hudson Steam Locomotive was also made in this time frame.

Minitrix produced several steam engines including the 4-6-2K4 Pacific, the 0-6-0ld Timer steam engine and 0-6-0 switcher and the 2-20-0 Decapod. There was an all metal 0-6-OT prototype steam locomotive early on from Minitrix. This engine was boxed and labeled “Little Donkey” when sold in the United States until the end of the 1990’s.They also packaged and sold the Evening Star Deluxe Train Set with Minitrix 2-10-0 Steam Locomotive. All Minitrix products were imported to the United States, first by American Tortoise then by Model Power from the 1970’s until 1980 when Con-Cor began imported the Minitrix steam engines and other products.

Then the Associated Hobby Manufacturers (AHM) began to market N scale trains including N gauge steam engines that were made in Italy by Lima. They were called minitrains and were oversized even though they were advertised as N scale. Once again the train importer ran into difficulties and reorganized as AHM by Regal Way. Then IHC (International Hobby Corporation) took over until they discontinued in 2009. This same line is still offered today by Con-Cor as Big City Hobbies. In this AHM group there was the AHM Q1B 2-6-4T Steam Locomotive.

Bachmann Brothers came into the N scale field in 1968 with trains made in Hong Kong until the Kader Group purchased them in 1980s. Then Kader changed their name to the more familiar and more anglicanized Bachmann name. The headquarters in now in Philadelphia and they make the Bachmann Docksider Steam Switcher, Bachmann USRA 0-6-0 Steam Switcher with Tender, and the Bachmann Prairie 2-6-2 Steam Locomotive. In 1990 they added several steam engines such as Bachmann 4-8-4 Steam Locomotive with 52′ 12-Wheel Oil Tender, Bachmann Norfolk & Western Class J 4-8-4 Steam Locomotive.