START Creating Your Own Uniquely Realistic Model Railroad Rural Scene
that “You Can Be Proud Of Displaying” with these Model Farmyard Buildings...
Download, Print, and Build Now!

Buy Plans for Individual Models, or Get All 3 Farm Buildings (SAVE 51%)
Equipment Shed/Barn, US Style Barn, Red Barn With Stable & Outside Toilet 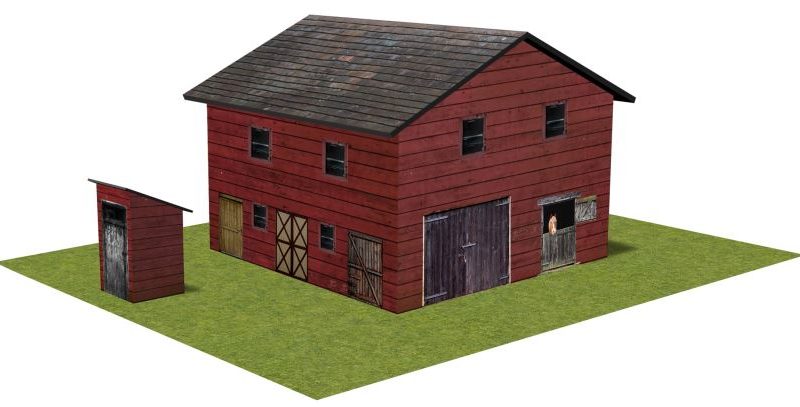 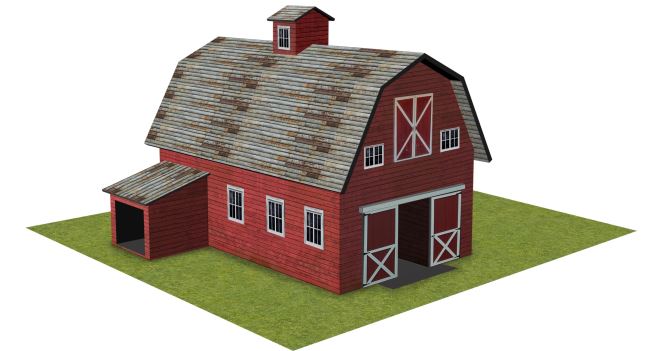 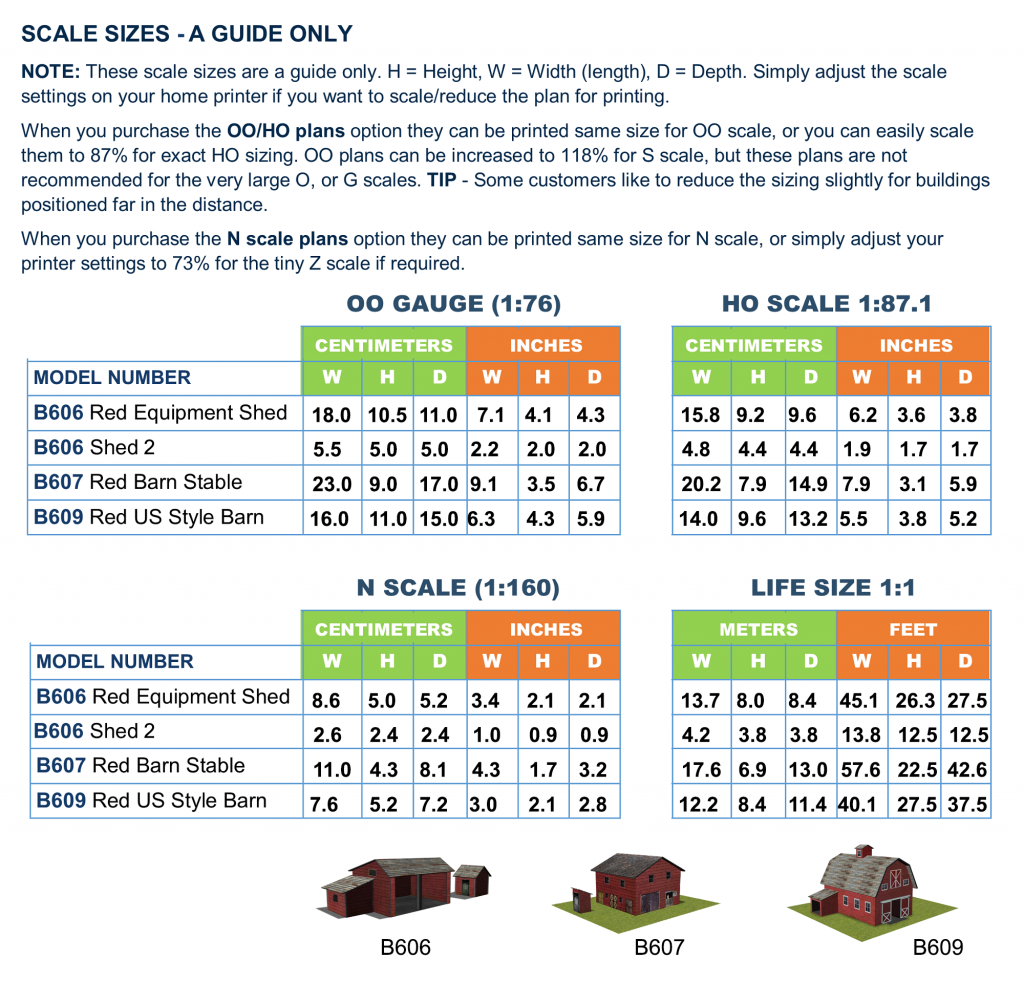 Many model railroads include a farmyard or rural setting complete with a farmhouse, a barn, and a maybe a tractor or equipment shed to add character and authenticity to the landscape.

These model railroad farm buildings are available to you as a PDF file which you download and print using your home PC.

You’ll be surprised how realistic these downloadable color plans are with a great deal of attention given to replicating true life details that are likely to be found on farm buildings of this type. The models can be printed and assembled for an OO gauge, HO scale, or N scale layout. You just glue the plans directly onto the back of some spare cardboard (a cereal pack works well) and cut out the design, then glue it together.They are enjoyable to make and surprisingly easy to construct… and, you can even add your own creative touches.

After downloading you can print each plan out as many times as you choose without having to pay for another download. Each farm building comes complete with numbered drawings pointing out where each
part fits in place.

Now You Can Have The Confidence Of Knowing…
The Scale Models You’re Making Are High-Quality And Wonderfully-Realistic…
Even If You Have Never Downloaded, Printed, And Built Your Own Model Buildings!

The printable downloaded plans for constructing these scale farm models are not expensive especially when you compare them to the price of comparable plastic models; the plans are simple to download; very enjoyable to build; and are especially realistic when assembled. Here’s a quick 12 step guide on how to build these scale model farm buildings:

1. Select the size of farm buildings you want to make: HO scale, OO gauge, or perhaps N scale.
2. Select which designs you want: Traditional US Style Barn, Equipment Shed/Barn, Red Barn With Stable & Outside Toilet.
3. Download and print out the plans.
4. Use either a spray adhesive, clear glue, or Mod Podge to adhere the printed paper plans (ordinary printer paper works well) to cardboard (recycle a discarded cereal container). Avoid letting any air bubbles getting stuck between the copy paper and card. Then, allow to dry.
5. Using a craft knife, lightly score along the folds guides. A light cut will do, as the purpose is just to make folding the card plan easier and neater.
6. The next step is to cut out the card plan using your sharp craft knife. Three to four light cuts are better (and much safer) than press hard with one firm deep cut.
7. A numbered diagram is supplied with each model as a guide to where each part goes. Use this as your guide when gluing each part together. Reasonably quick drying clear adhesive (about $2 a tube or less) works well, as does Mod Podge. Super Glue is really good for joining smaller (sometimes fiddly) parts together on your N scale, HO/OO scale models.
8. Clamping parts together when drying is a good idea. Clothes pins (pegs) are ideal. Even some small tweezers are handy as a temporary clamp when using Super Glue on small parts.
9. To complete the job, touch up the edges of each model building with a lead pencil, or perhaps an artist brush.
10. Balsa wood is an excellent inexpensive material for adding posts and chimneys to scale models. Small strips of balsa wood can be easily painted and glued into position.
11. The following two steps are entirely optional. You can glue some additional scraps of card on the inside of your assembled miniature models, making them extra sturdy.
12. You might also choose to apply a couple of light sprays of clear (non gloss) varnish to your assembled scale model farm buildings to provide even more protection. Matt Mod Podge could be used instead as it is an excellent sealant.

There are numerous iconic barn designs throughout North America originating from different periods in
US history, and designed for varying uses and specific forms of farming and agriculture. The earliest designs were often big open structures to buildings fitted out with cattle stalls and areas for hay storage.These historic farming buildings were once an intrinsic part of the American lifestyle, and are still an important part on many working farms.

The interesting fact is that the first barn outbuildings were not American by design, but actually European style longhouses which incorporated stables, space for hay storage, and sleeping quarters. The model farm buildings available here would be suitable for replicating outbuildings that would blend in nicely on an HO scale, N scale or OO gauge railroad layout depicting a rural scene.

European and more specifically English-style barns were constructed from the 1600’s through to the 1800’s, and often featured a spacious, open central floor area used for wheat threshing. Grain production was the main revenue stream for many of the early American farmers, so the English style timber-frame construction barns were designed with the biggest area of space available for threshing wheat. They had no or few windows, and usually had only one door on the longest side of the barn, and did not include a basement or loft space. It took until the 1800’s for the farming community to recognize the benefits ample light had on the well-being of livestock, and after that windows became more commonplace in barn designs. Modelers could easily incorporate additional windows as part of the assembled scale model structures by simply printing off an extra copy of the windows and gluing them onto the most appropriate wall exteriors.

In the early days builders adapted skills many had learned from building arching hallways reminiscent of cathedral designs to create spacious yet functional rural outbuildings. So, it was the colonists who first created the traditional style of farm barn that can still be seen in many rural landscapes across the USA.

English barns were not necessarily designed for large-scale agriculture, as the harvesting and eventual storage of grain was the main function. The average farmer during the 1700’s to 1800’s did not generally have big herds of livestock, and needed only a few animal stalls or stables for the family few cows and workhorses.

However, some rural barns were constructed for specific uses: dairy farming, drying tobacco, horse breeding, cattle feeding, and as livery barns. As the westbound migration increased, barns located in the US Midwest and West evolved their own designs. Although these outbuildings echoed Eastern designs, the Prairie barns, Western barn, and Pennsylvania Standard reflected more of the rancher’s different requirements.

The tall ‘Prairie’ barn was the most prevalent barn found across the US Midwest and West. Built from the late 19th to early 20th centuries, these Prairie barns were big enough to accommodate draft animals, milk a few cows and store hay in an overhead loft overhead.

Prairie barns were typically of wood frame construction utilizing gambrel roof designs, though some barns had curved ‘gothic’ roofs. These barns were generally positioned on a stone or concrete foundation, with many having sidewalls constructed from stone for the lower four to five feet.

Both Western and Prairie style barns had a big hay door entrance into the haymow, and they typically had a rain hood overhang directly above the door. On the inside, a track ran along the ridgepole extending out along the hood where a hay-fork could be dropped to grab hay out of a wagon and lift it to the loft.

Specific use and modifications resulted in unique barn structures

Livery stables came in various shapes and sizes with some livery stables, barns, and milking barns being rather unique styles due of their use or design modifications. Many such outbuildings were nothing more than enclosed basic shed-like structures. Stone was used in instances where it was available.

Milking barns, which were commonplace in Amish communities, were typically long structures equipped with stanchions located on the first floor, and the haymow above.

Having an overhang above the first floor of a milking shed provided shelter below. The overhangs would more than likely have been positioned on three sides of the barn, with the front and one side overhang being accessible for animals in the stock corral. An overhang on the third side would have been outside the corral providing some weather protection for buggies, wagons, and other equipment.

Whichever model railroad farm buildings you choose to make, enjoy the process and don’t be afraid to add your own creative touches to your finished N, OO or HO scale models. If you make a mistake, you can always download another copy of the plan free of charge.