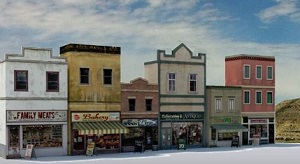 Most hobbyists want their model railroad to reasonably closely resemble the appearance and operation of a full-sized real railroad. However, for that to become a reality, the trains will need to operate in a realistic fashion.

There is always the temptation to wind up the throttle and have the trains rocketing around the track at unrealistic speeds. We’ve probably all done it at times, just for the fun of it, or to test the capabilities of the trains and track. And, we’ve probably all experienced derailments and crashes as a direct consequence of operating our trains too quickly, especially on S bends, gradients, and curves.

Although the “child” in us all likes to appear occasionally, running scale trains is not practical or at all realistic, and can result in costly damage to expensive locos when they jump the tracks onto the floor. The sensible thing is to completely avoid any temptation run your trains at excessive speeds, and to operate them at scale speeds instead.

It might take a bit of getting used to, but if you place a tape measure (ruler, or yard stick) alongside a long straight section of the mainline, you’ll be able to practice driving your trains at various scale speeds. Using the above calculator, you’ll be able to accurately measure the time taken to travel various distances, and measure the speed taken.

For your reference; any yard movements are typically undertaken at no more than 15 mph (24 km/h). Switching movements will typically be around 5 mph (8 km/h). Mainline speeds are usually in the vicinity of 25 mph to 60 mph (40 km/h to 96 k/h). The speeds would typically vary from train to train depending on the age/power, what it is hauling, and the era and track typographically where it is being operated.

By using this scale speed calculator you’ll be able to adjust, and compare scale speed operations with those of full-size (prototype) trains. You’ll be able to measure starting and stopping times and distances by braking or accelerating at the various scale rates.

When you get accustomed to scale speed operations, the operating sessions should become more interesting, especially when operating fewer engines with cars that ALL run accurately. Nothing can spoil operating sessions quicker than having erratically running engines, and cars that won’t keep to the track.

Badly operating locos are generally extremely frustrating on a layout. Whereas, a smooth running, reliable engine with ample pulling power will achieve exactly what’s required. Another thing to check is the couplers. They should all be positioned at the correct height and will need to be maintained so as to function reliably every time they are used.

A model railroad is basically a “giant machine” where every component becomes an integral part to keep the machine working smoothly and efficiently. The trackage needs to free of imperfections, and not cause derailments or stoppages for rolling stock. Check and double check the track gauge; test the wheel set gauge; adjust the coupler heights (if required); tune the turnouts, and weigh the cars correctly to ensure efficiency of operation. The locomotives and cars will need maintenance so that any potential problems can be rectified fixed before an operation session starts. Check and fix any cars with weight issues, coupler problems, or any that are known to derail frequently.

Many model railroaders set themselves a personal performance target of 2 or less derailments for every one hundred car movements.