MAKE A CITY BACKDROP- SAVE 57% TODAY! 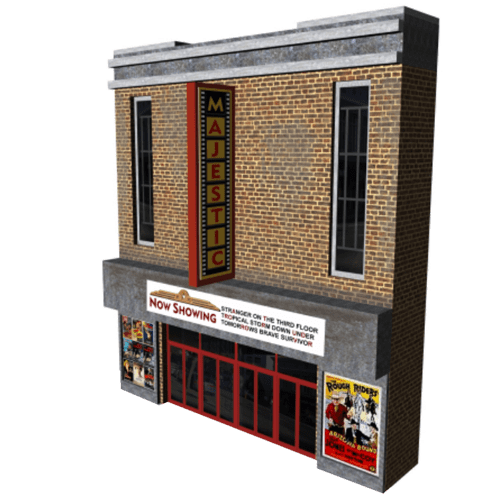 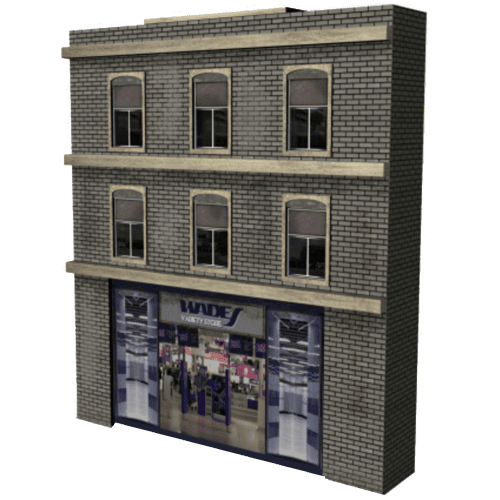 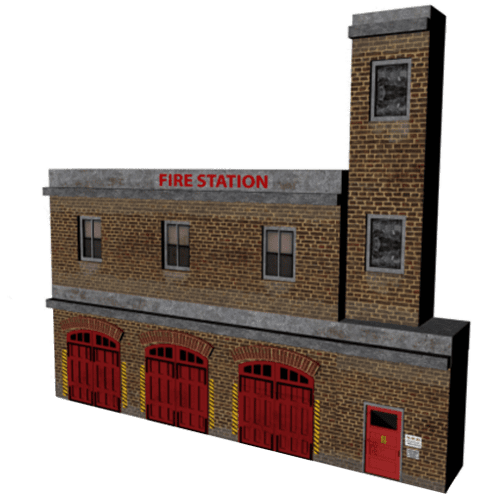 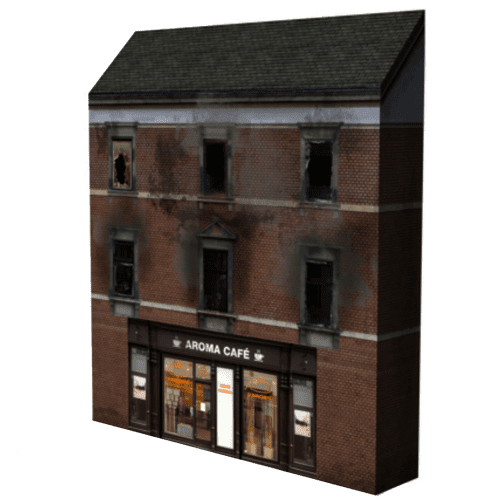 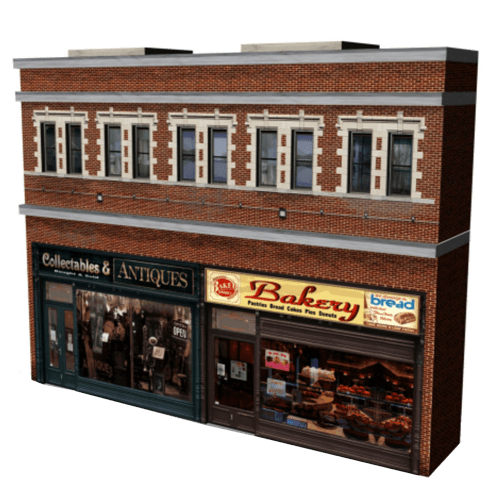 This city series of 5 downloadable paper plans to make scale model city buildings from corflute (or cardboard) is very interesting. The city series includes a department store, a fire station, a fire damaged building, a movie theater, and two retail shops under city apartments. The package deal of 5 paper models is currently for sale below half price.

The fire damaged structure is particularly interesting with sooty black burnt woodwork around the window panes (some broken). There is also plans for a city fire station that can help complete the back scene. Yes the downloaded plans are for background structures so require less space than ordinary scale models. This series of scale model city buildings is truly unique and not available anywhere else on the web. So if you decide to download and build these 5 scale model city buildings, your model railroad will be very unique and different nearly every other scale railroad in existence. The plans can be downloaded and made up as ho scale city buildings, OO, or n scale city buildings.

There are no reviews yet.

Be the first to review “City Series” Cancel reply

Locomotives are said to be the most important element in a model train layout. However, a lonely train running along an oval track is not going to captivate the viewers. To add life to a train layout it is necessary that you add certain elements and details. This article discusses in detail five important things to have with your model railroad layout.

Besides having one large train station on your railroad you can have several small ones in remote areas. If you are trying to depict different scenes in your layout like a mine or a forest then placing a small station building in that area will add depth and realism in the scene that you are creating.
In most cases, adding at least one train station model is absolutely necessary to make your railroad resemble the real world.

You can add depth and dimensions to your layout by adding a realistic landscape to your model setup. Start with laying down the track and ballast. Then you can start designing the landscape around the tracks.

Instead of a flat track, try using a circle or an oval track, and maybe include some sidings where trains pass each other, or load and unload goods, or change wagons and locomotives. You can do a lot with your railroad to keep your viewers interested in your setup.

Adding a mountain in the middle of the layout and watch the train disappear behind it and then reappear is often a good technique to keep the viewers interested in the activities on your layout.

Apart from the trains and train stations; having buildings in your layout is also very important. This will add a lot to the depth of realism that you are trying to capture in your scale railroad. There is an excellent range of printable n scale city buildings and ho scale city buildings on this website to download and print on paper. The scale model city buildings in this series even features a city model of a city fire station.

The downloadable scale building kits you add in you train layout should be according to the scene that you are trying to depict. For instance if you show a city in your layout then you can add skyscrapers and scale model city buildings, but if the train is in a remote place then adding a farm or a log cabin kit will make it look more real.

If you want to capture a scene from the past then make sure that you add the weathering effects on the structures that you add in your railroad. This will help age them and make them look as if they have been there for a long time exposed to the elements.

Buy model train buildings from this website and you’ll discover the difficult weathering is actually pre-done for you. Many of the structures include cracks, flaky and peeling paintwork, scratches, rust marks, mold stains etc. to add to the realism. The model railroad kits are easily downloaded ready for printing using a home computer.

• A boy finding his dog around the train track.
• People waiting to get on the train.
• Families seeing off their loved ones at the model train station.
• A man and a women taking stroll in the station.
• People putting luggage on the train.
• A sports ground with players.
• A street scene with pedestrians.
• A fire scene with firemen and onlookers.

No railroad model is complete without the addition of the minor details such as stop lights, signs, and intersections. These things not only make your layout look real, but they also make it a lot more interesting.

Add these elements in your layout and watch it come to life in front of your eyes. It will not only mesmerize you but it will also captivate the viewers of your railroad.

Train stations are many and varied in the real world. Some are fully automated with automatic ticket machines. Others have ticket offices where passengers can buy train tickets for their journey. Some railway stations include fully enclosed waiting rooms, lost and found offices, a left luggage office, arrival and departure boards, toilets etc. Some stations have taxi ranks, or bus stops located outside.