A barn workshop, tractor shed and smoke house, and barn with WC. 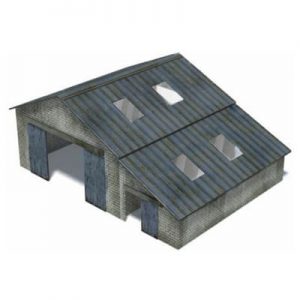 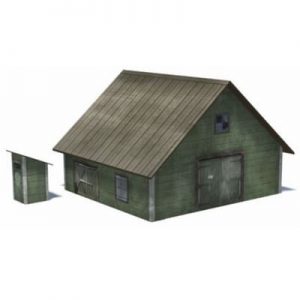 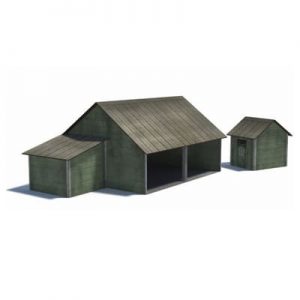 This package deal of paper models has a tractor shed, a timber barn and WC, and a barn workshop priced at below half price. In fact; all 3 structures in this package of model train farm buildings could be used as barns for a railroad if desired. If you look closely you will see they are beautifully detailed and weathered to make each model building look totally lifelike. This is down to the highly detailed realistic textures seen on each barn, none of which look perfectly clean or unnatural. Fact is they would look right at home on any top quality model railroad.

Downloading plans for these 3 model train farm buildings is very straightforward. The printed paper plans are then printed to HO scale / OO gauge / N scale. You select your scale prior to buying at the checkout. The textures get glued to cardboard prior to assembly. The completed barn structures are very sturdy and long-lasting.

HOW TO CONSTRUCT CARDSTOCK BUILDINGS FOR RAILROAD LAYOUTS

Model railroads have developed into a thriving hobby for thousands of modelers worldwide. With many enthusiasts not satisfied with a round or oval track, this fancy is now, not limited to intricately designed railroad models at museums. A lot of people have taken to designing and depicting life-size railroads, and making life-like imitations of various famous railroads. While of course, the train is the most important part of the rail road, there are 5 important essentials that need to be taken care of while designing a railroad.

These include the following:

2. Landscape: scenery adds dimension and depth to the railroad layout. Adding mountains, trees, and shrubbery, and maybe a canyon, can help make the model look life-like. Tunnels through mountains have always been a favorite.

4. People and animals: a deserted railroad can be scary, even if it is a model. Having people or animals scattered around the layout can make it more realistic and “add life” to the railroad. For example; model railroad barns need animals around to bring life to the scene.

5. Lights and signs: minor detailing such as adding lights and signs to the track can aid in making the railroad look more mesmerizing and interesting.

With more and more people taking up railroad modeling as a hobby, there are numerous aids for enthusiasts to build their models. From cardstock buildings available online, to stores where items are available. Modelbuildings.org is one such website, offering various cardstock model building plans that can easily be purchased, downloaded, and printed as per choice. Once purchased, the designs including model train farm buildings can then either be printed immediately or saved for later use.

Cardstock buildings or paper model train farm buildings can be bought off the website, and printed on paper of choice. The models, on the website, are designed as per specific dimensions. It is important to make sure they are thus printed in accordance with the scale of the railway. The default scale is OO, but the building designs can be zoomed up or down, to suit the HO. N scale plans are also available for purchase. Below is the conversion aid for the same:

Another important aspect of the printing is the paper quality and the printing quality. Light weight paper (90-120 gsm) is easy to fold, and print. Also, a high quality print is advised for the final print. For the first print, a low quality print works best.

Once the print is ready, it should be stuck on cardstock (hence the term card-stock buildings). Alternatively, cereal pack boxes can also be used. The extra areas should them be cut off, and scored along the folding lines. Care should be taken to not cut, but only score enough to provide ease of folding and sharp folds. Scoring along flap fold lines is also important to make sure the flaps fold properly. Once this is done, the model print should then be cut-out using 2-3 strokes, instead of one heavy stroke. Fold along the lines, and apply glue on the flaps. Stick together all the pieces as per the instructions included to have a realistic cardstock building for the railroad.

1. Dry Brushing Technique This technique requires the use of a dry paint brush and the appropriate color. Dip the brush in the paint, and then wipe down maximum paint off the brush. This can be done using a paper towel, or by sliding the brush along the edges of the paint bottle. Then, paint over the structure. The dry brush will leave streaks making the card stock building look old. Different brushes and strokes can be used to create various effects. Different colors can be used: a mixture of red, orange, and brown can be used to depict rust; exhaust stains can be depicted using gray; and oil and grease can be shown with black. Matte acrylic paints work best in most cases.

3. Dull and Dirty Spraying with black or brown over the trains and the buildings in the model will make them look a little dirty. Squeaky clean and shiny looks fake and is never life-like. To remove the straight-out-the-packaging look, side motion airbrushing with a mixture of paint and paint thinner will help. It will make the train cars and buildings look dirty, and worn out, and hence, much more realistic. The paper plans for the model train farm buildings on this page can be downloaded.