BELOW HALF PRICE NOW! Special Buy. 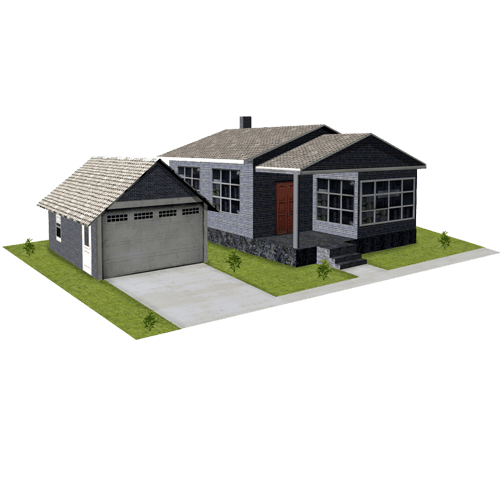 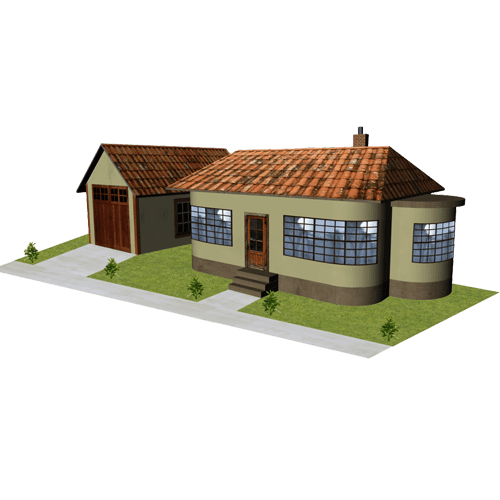 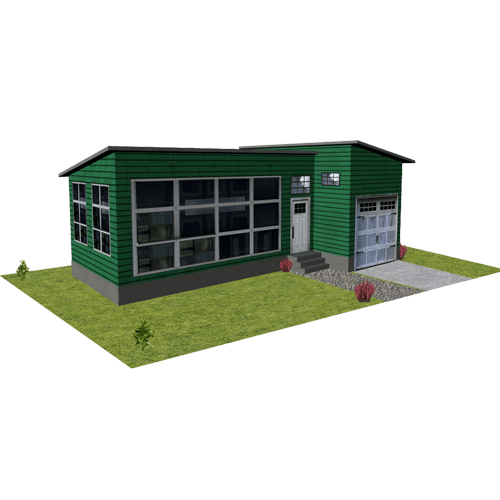 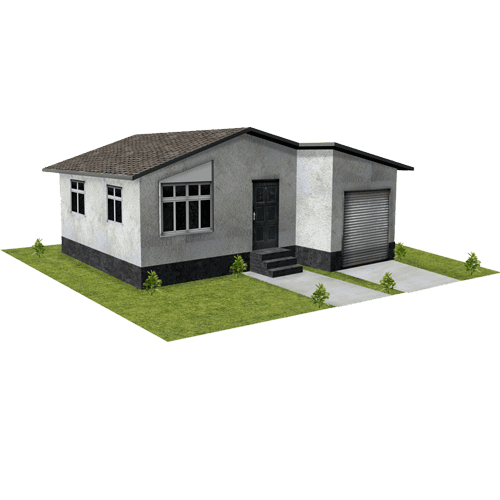 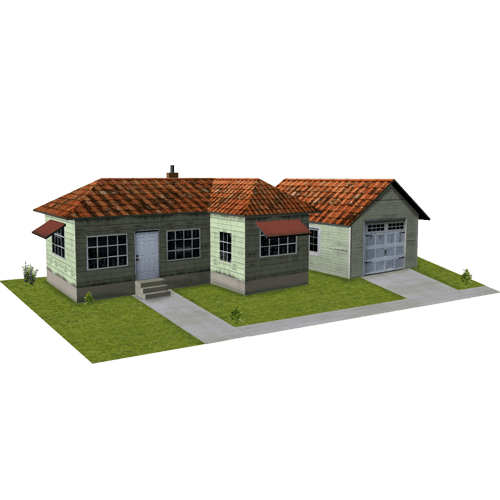 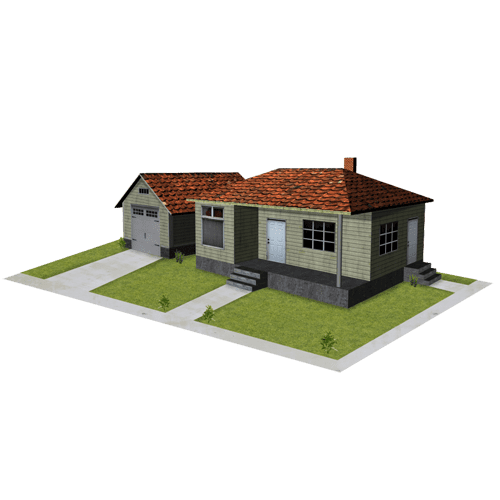 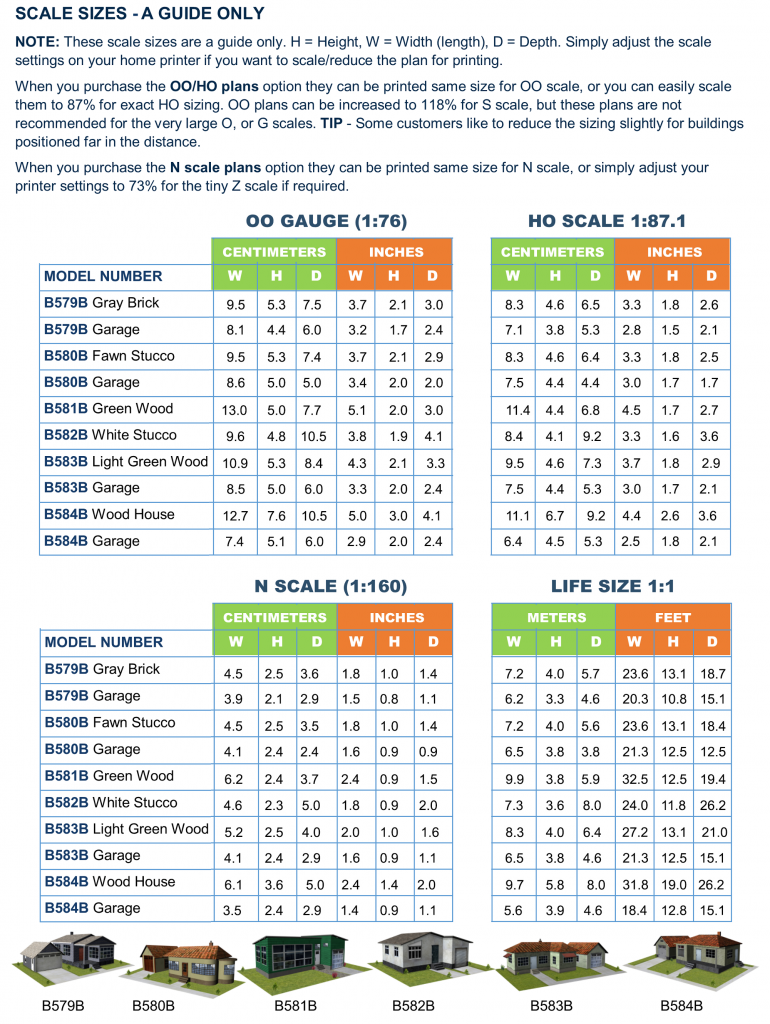 You’ll be surprised how quick and easy it is to make realistic-looking house buildings for your scale railroad using paper house models downloaded online. How to make a model house out of cardboard doesn’t need to be a mystery thanks to the internet and being able to download paper house models to your own computer ready for construction and assembly using cardboard. And, the cardboard can be free when you use recycled card from used cereal boxes which is better and cheaper than using the card-stock bought from art supply stores. To make a model house out of cardboard from recycled cardboard is also better for the environment, but it is the strength and free element of this cardboard that really appeals to the model railroader, not to mention the superb realism that can be achieved when building paper house models downloaded online.The series # 2 of paper model houses featured above include designs of houses constructed from brick, stucco, and naturally weathered painted timber. Three of the paper model houses even have garages included on the plans. Customers get to download a free printing and assembly guide after purchase of the paper model houses or other buildings on this website. The downloaded plans also include drawings of part numbers to make assembling the paper house models easy to follow. So, you will no longer need to asks, “ how to make a model house out of cardboard?” because the instructions are step by step and straightforward to follow.

Purchasing downloadable printable plans in the package deals is the most economical way to buy the paper house models for sale here. Each house plan is available separately for those who just want to construct a particular house model from paper and cardboard. The package deals however include savings on the price of between 50% and 87% off the regular retail price if the house models and other model buildings were purchased individually.

You can make these paper model houses to OO SCALE, HO SCALE, or N SCALE from any material you like. Customers can select from HO / OO scale, or N scale when proceeding to the checkout. OO plans can be scaled on a print to 87 percent to accurately replicate HO scale.

How to make a model house out of cardboard – here’s how.

The card from an old cereal box (cornflakes, muesli pack) works well, or you could use some foam board to make the model even stronger. Cardboard from recycled cereal boxes is more than adequate and because it’s free, makes more sense than purchasing glossy card stock (unnecessary). Cereal box cardboard is thick enough for making most paper house models and adheres well to ordinary photocopy paper which only costs about one cent a sheet. Regular photocopy paper generally works better than applying more expensive semi-gloss paper. Not having the gloss on the paper looks more realistic, but you can apply a light spray of clear matt varnish to your paper house model when completed. This step is purely optional, and many model railroaders don’t bother doing it. You now know exactly how to make a model house out of cardboard, but there are step by step detailed instructions too if you get stumped during the construction process.

Simply download the paper house plans… they’re in PDF format, print them on your own home printer, glue them to cardboard or foam board, and your paper house model is ready to assemble. It’s that easy! Save the printable plans to your computer and you can build another house at anytime you want.

Quick Tip From A Rail Modeler

Daniel G sent in this tip:

I have made structures like this with cardstock before and they turned out great. This time I decided to use cardboard for the roof but core flute sheet for the walls which I got from our local discount variety store for $3.95 a big sheet. The core flute worked great and made it real strong.

To hide the joins at the corners was easy. I glued two paper sides together using the flaps on the plan BEFORE I glued on the core flute which I had pre cut to the exact side. I used a spray glue. That way the corflute was totally hidden inside the structure and the corners were just the paper design left showing which looked very neat. I also ran a lead pencil along the edge of the roof when finished to hide the carboard edge. These are little tricks I learned so I hope they helps someone.

I got some cardboard building patterns that had to be downloaded and printed in any scale. The first building I did was a small shed in HO scale that could be used in many applications in a railroad yard or as a wood shed in the wilderness next to a cabin type building plus more.

The cardboard I used was from a cereal box. I printed the pattern by changing my printer’s settings to scale it to 87% of the actual size. The PDF came to me as OO scale so I reduced the pattern to 87% so it would be exactly HO scale. I then glued the pattern to the cardboard with an ordinary school glue stick coating the paper and the cardboard and then applied the pattern. After rolling with a hard rubber wall paper roller to remove all or any air bubbles making sure not to fold or rip the pattern, I left it for the glue to dry over night.

I carefully cut out the glued pattern using a scalpel and a steel ruler to keep the cuts as straight as possible. I also left a glue tag along the bottom edge of the wall sections so that I could add a floor as this will also make the building stronger. I scored the cardboard where it needed to be bent with the back edge of an old blunt blade. I also cut around three sides of the door and scored the forth side so that the door could open. I then bent all the glue tags at right angles using a square edge of the MDF cutting board and also the corners of the building. I cut the floor section making sure it was the right size and square.

I glued the sections together using a small tube of super glue making sure not to glue myself to the cardboard and clamped the joints together with some small spring loaded craft clamps and left them to dry doing just the wall joints first and making sure that they matched, then I glued in the floor and finally the roof section and the ridge molding. Having a floor makes it easier to glue in position on the layout.

By taking your time and paying attention to detail you will have a pretty good looking building to add to your layout and they are also inexpensive to download and make. I added some clump foliage, some railroad junk just scattered about the building, a couple of shovels and picks leaning against the shed and also some railroad workers to add more realism to the scene.

I also made a second shed and a cabin in some where between N and HO scale to add to a mountain scene away from the railroad as though it was in the background. The cabin and the shed were surrounded with pine trees. I scattered some under brush material around the clearing including same small tree stumps painted and weathered. I cut up some small dowel into firewood lengths and split these with a chisel to represent cut firewood and made a small pile by the door of the shed and a larger piece as the chopping block I also found a white metal axe in my junk box and painted and weathered it and glued it to the top of the chopping block.

By adding the small details to a scene the viewer will notice them, perhaps not at first but they do add interest and I noticed that viewers love to make comments on the things that they find, like further up the ridge a hunter returning to the cabin with a small deer on his back. I heated the small plastic model deer in hot water until it was soft enough to move the legs etc to fold over the shoulders of the hunter then glued in place. A small thin piece of plastic rod to represent the rifle glued to the shoulder of the hunter makes it look real. You don’t need to model the whole gun as the rest would be hidden by the deer.

On the cabin chimney I painted the top with grime paint to represent the soot and creosote from the fire. I added a female person in the doorway of the cabin and a small boy playing with a dog in the clearing. I added a phone booth as an outhouse toilet against the trees from a different set to complete the scene.

Enjoy making your paper house models now that you are fully familiar with how to make a model house out of cardboard. Enjoy construction your model buildings.