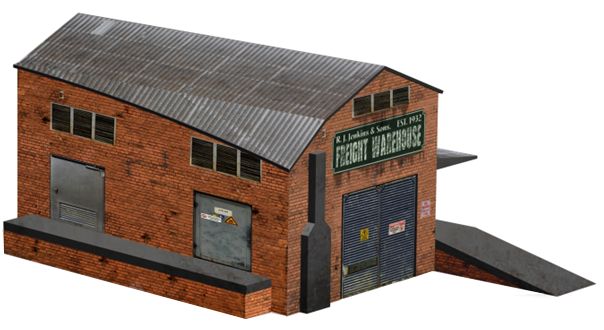 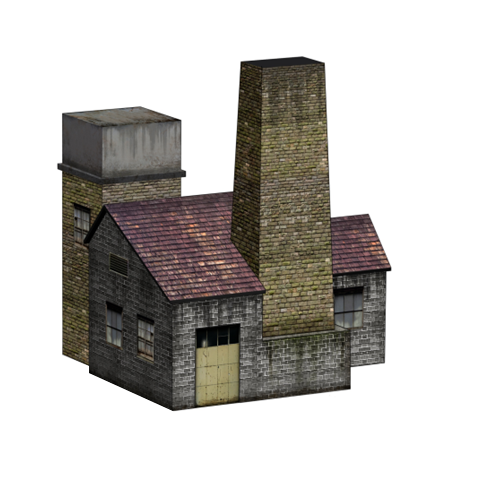 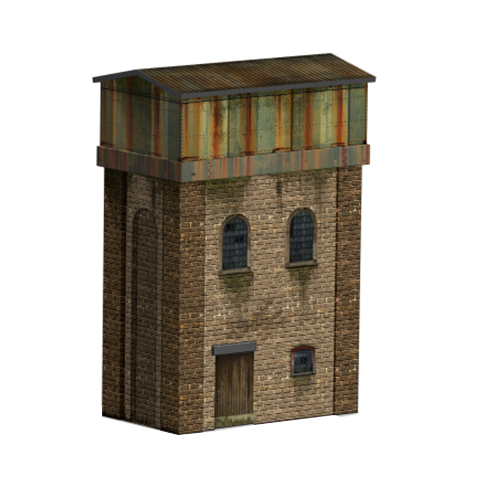 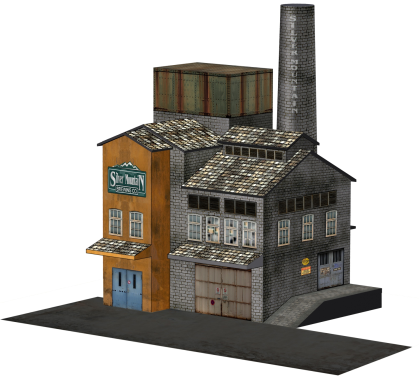 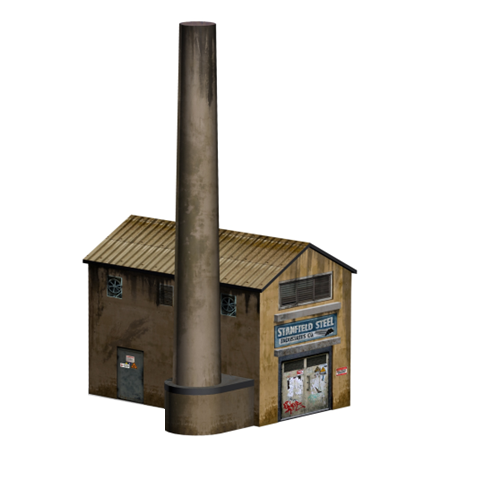 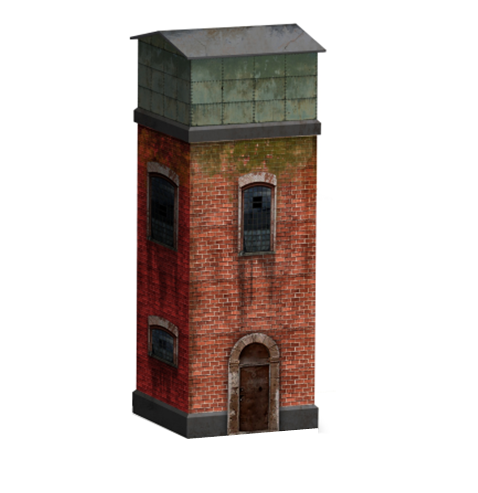 Many HO scale, OO gauge, and N scale model railroads focus around the age of the steam engine, a time when industrialisation and railway expansion changed life forever. The PDF model building plans of model train industries available for sale on this page perfectly reflect the atmosphere of life and character from days gone by. These meticulously detailed miniature scale model train industry models can be downloaded, printed, and assembled using cardboard (cereal boxes work well). Other materials such as balsa wood can also be used (if desired) to add even more detailing and uniqueness to the finished model train industries on the N scale, OO gauge, or HO scale train layout. The plans included easy to follow diagrams to assist with construction. There are also several helpful videos in the top navigation bar demonstrating construction methods for this type of scale models.

Download plans for these industrial structures directly to your computer in PDF format. When purchasing, simply plans select either from the OO / HO or N scale options. Following purchase you will obtain access to the MY ACCOUNT area (a link is located at the top of each web page) where you can easily access your purchases ready for downloading onto your computer to use or keep for future use. 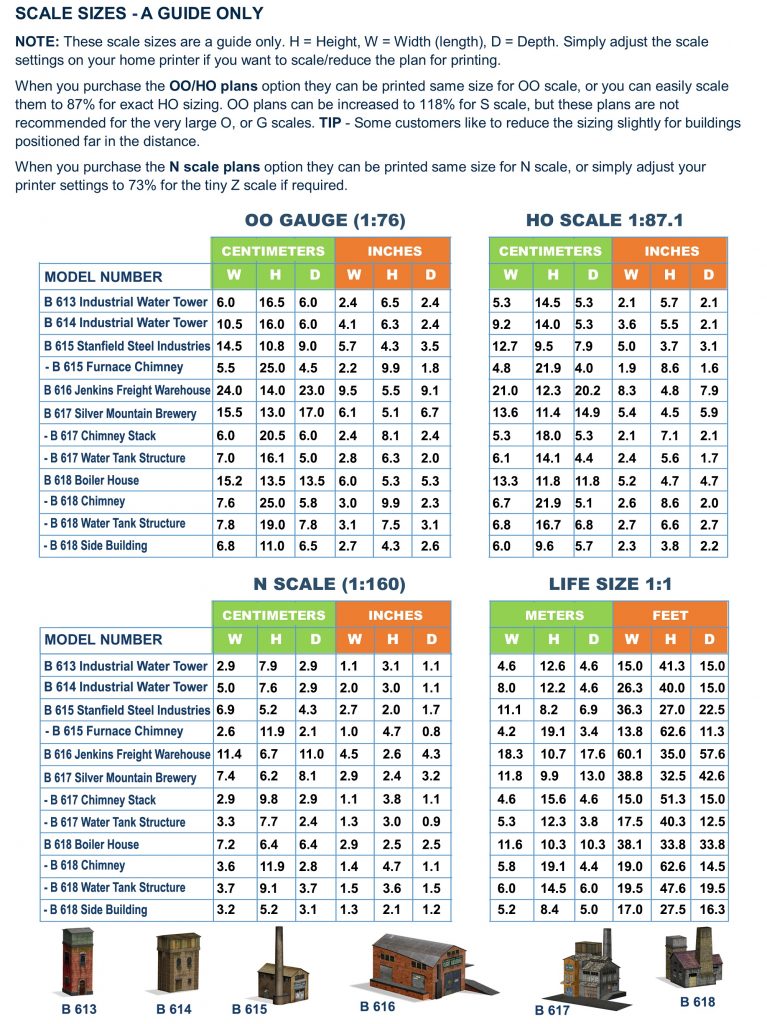 To function, steam engines and factories needed water reservoirs or towers like the scale models featured here. In days gone by, city life revolved around manufacturing and factories just like the scale model brick buildings and warehouses seen here. Many factories needed brick or stone chimneys for the safe release of the combustion gases, just like the examples available here. Rail transport played a vital role in the transportation of raw materials and goods to and from factories for many decades following the industrial revolution, so having a railway setup with model train industries makes a lot of sense.

When It All Began

Some of us will remember learning about the Industrial Revolution that began in the 18th century. It was a time when rural agricultural based life changed to become more industrialized and urban based. Electricity and inventions such as the cotton gin permanently changed the way society operated. The first factories were built as was the transcontinental railroad.

This carried through to the Second Industrial Revolution which saw the rapid development of mass production and transportation that in turn made life a lot faster.

From the late 19th to the early 20th centuries, cities and towns grew, factories sprawled. Instead of people’s lives being regulated by sunshine to grow crops and work the farms, the factory clock became the controlling factor for many city folk.

There were rapid advances in the creation and use of steel, and chemicals. Wider availability of electricity aided production capacity, including the manufacture of mass-produced consumer goods and then weapons. Advancements in transportation made it easier to transport goods, and for people to move around on trains, automobiles and bikes. The development and expansion of railroads were responsible for transporting much of the production. Communications improved and ideas spread via newspapers, the radio, telephones, and the telegraph. Life suddenly got a whole lot faster. Train transport of goods, chemicals, and raw materials played an important part in the industrialization of western civilization.

Factory assembly lines arrived thanks to innovations in the production line technology. This was assisted by advancements in materials and the industrial tool-making that led to the mass production all types of goods changing the way families lived, as well as changing the physical landscape. Factories produced automobiles, canned goods, over-the-counter drugs, household appliances including sewing machines, steel girders necessary to build skyscrapers, and railroad tracks that cut through the countryside, the plains and mountains.

The development of long-distance transportation networks serviced people and cities connecting them by rail, steamship, roads, and canals. This opened new markets for farmers, manufacturers and bankers who could take the natural resources and manufactured goods to a global marketplace. Scenery on a railroad layout with model trains transporting freight to and from an industrial area is a wonderful way to re-enact the important role the railways had in advancement of living standards in the west.

The factories and buildings pictured on this page are typical brick style structures that have played an that type of vital role in manufacturing and transportation over the years. Water reservoirs where essential to keep factories and steam trains running. Brick masonry industrial chimneys and boilers were integral to the operations of many factories, and warehouses were necessary for the safe storage and loading of mass produced products.

The traditional style water towers pictured on this page will bring an atmosphere of life and character to any HO scale, OO gauge, or N scale model railway. They are incredibly realistic in appearance and can easily be constructed from card, or corflute. Painted balsa wood can also be used to add extra detailing such as the addition of ladders, fencing, posts, trestles etc.

The amount of detail you add, or how much you vary and adapt your finished scale models from these plans, is really over to the individual hobbyist to decide. The important thing however; is that these downloaded plans can be easily be adapted with a little creative thinking, and once downloaded, additional copies can be printed out to extend or replicate each model.

Let’s now look at a bit of history. Elevated brick or stone masonry water storage tanks were used for municipal water systems and industrial factory complexes in the late nineteenth century and for much of the twentieth century. At the height of the steam engine age these giant structures were found in many large train depots and terminals in both the USA and UK.

The construction of elevated water reservoirs was to enable storage of water for fire protection and to maintain a constant water pressure for factories.

Many communities and industrial enterprises in need of water works were not located near natural reservoirs, or were in locations where man-made ground reservoirs were not viable. This resulted in the need for water towers, standpipes, and elevated tanks of various designs.

Factory operations often required large volume of water for manufacturing and production to continue uninterrupted, and as an emergency backup reserve supply for fire protection. The supply couldn’t be subject to pressure changes, or cause possible interruptions to the factory, or the local town water system. These elevated tower structures supporting a water tank were constructed to a height sufficient enough to pressurize a water distribution system. Pipes were often concealed inside or behind brickwork.

So, in simple terms this style of tall brick water tower was essentially a raised tank for the short-term storage of water thereby allowing a constant flow to citizens or industries to during peaks in use. The original source of the water supply could have been a nearby lake or reservoir, perhaps a river, or a well, or a deep bore-hole. In higher geographical regions, the source might have been a reservoir located in the hills, where the fresh water could flow down through the treatment works under its own gravity.

Water towers really began to develop and proliferate during the 19th century. This was partially due to the increased availability of cast iron piping and tanks replacing earlier designs constructed from lead or wood. Cast iron was definitely a more stronger material, and this in turn made storage of larger volumes of water more feasible. This was an important development due to the weight of water, and the storage tanks which needed to withstand a pressure of around 224 gallons of water weight per 1 ton.

As history shows, the period from the mid 19th century saw a massive expansion in the railways. Steam engines (iron horses) required a considerable amount of water, and many water towers with cast iron tanks were constructed along the many rail line routes. Water tower building tailed off after World War Two.

The chimneys were basically made of three parts: the base, a stack and a crown. The base, which didn’t actually exist in some industrial chimneys, is the lower element positioned between the stack (the main body of the chimney), and the ground foundation. Industrial chimneys came in different shapes, namely, circular, quadrangular, or octagonal, with some having decorative elements on the sides and on the transition to the stack.

The classic industrial chimneys were designed to sustain the self-weight imposed on them, and to withstand wind forces. The industrial chimneys generally had a stack with a truncated cone shape. There were also stacks designed with truncated pyramid shapes some displaying octagonal cross, or square sections. It was generally thought that having a circular shape made it easier to expel the gases, and this design also provided less resistance to the wind. The circular shape stood up well to the wind forces by minimising the impact of wind on the structure. However, the circular shape was often used where there was a lower consumption of material, and the bricks were often rounded in shape to adapt to the chimney’s overall geometry. The upper part of the stack usually had an ornamental crown to complete the chimney design.

Industrial chimneys higher than 100ft (30 m) were typically a feature of major industries. The height of industrial chimneys was often determined by the proximity to nearby populations as the higher the chimney, the less likely people were affected by the smoke billowing out the top.

The foundations of industrial chimneys typically comprised a bottom layer of concrete, and on top of that was the masonry of the chimney base or stack. The stack itself was generally constructed using several layers of brick rows that was divided into equal parts with consistent thickness of each section. The height of each section depended on the total height of the chimney. To ensure maximum stability, the lower section would have been wider and thicker, having the largest number of rows of bricks along the thickness.

The perimeter and throughout the height of the chimney, the bricks were typically arranged in a transverse direction, which linked the different rows of bricks of the chimney’s walls. The actual transition between consecutive sections would have corresponded to the reduction in the chimney walls’ thickness by one brick. The upper section of the chimney might have had a thickness of two bricks.

Plans for the OO, N scale, and HO scale model industrial buildings available for sale here on this web page can be constructed from cardstock and some balsa wood which can be covered with the printed out textures, or simply painted using acrylic paints. Cardboard is the main component use in the construction of these miniature structures. The PDF plans include: 2 water tower reservoirs, a brewing factory, a boiler house with a tall brick chimney, a steel industry plant, and a factory freight warehouse… all of which can be built to HO scale size, N scale, or made for OO gauge model railways.