Bring Realism and Character to Your Model Railroad Scenery with
an “Impressive Grain Elevator” and these Realistic Scale Model Farm Buildings
Download Now, Print, and Build! 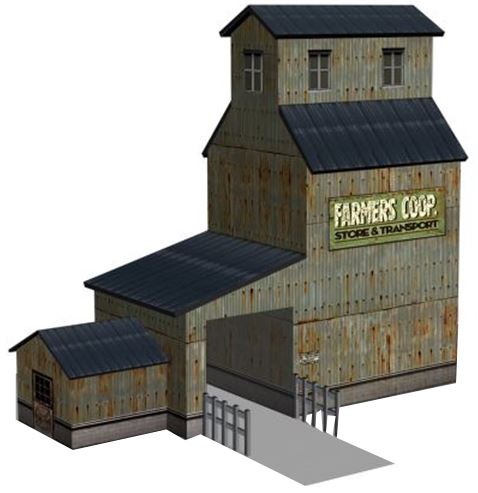 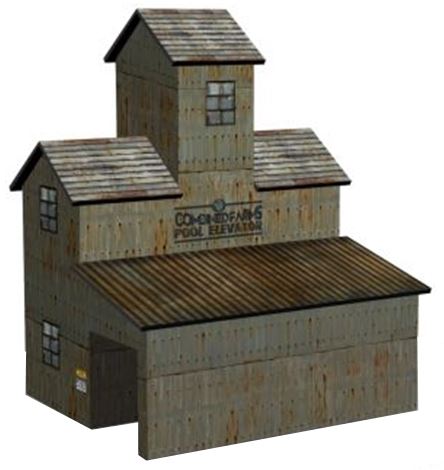 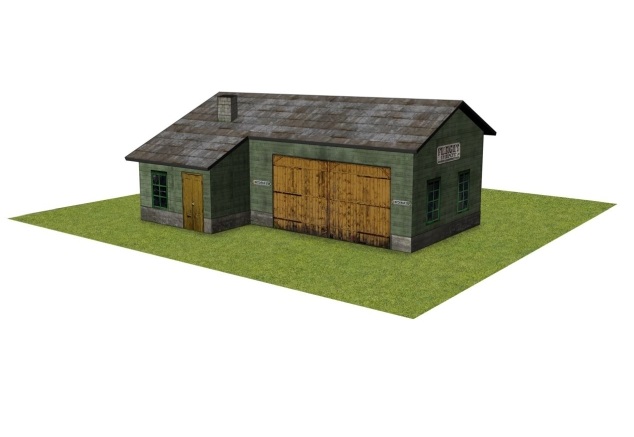 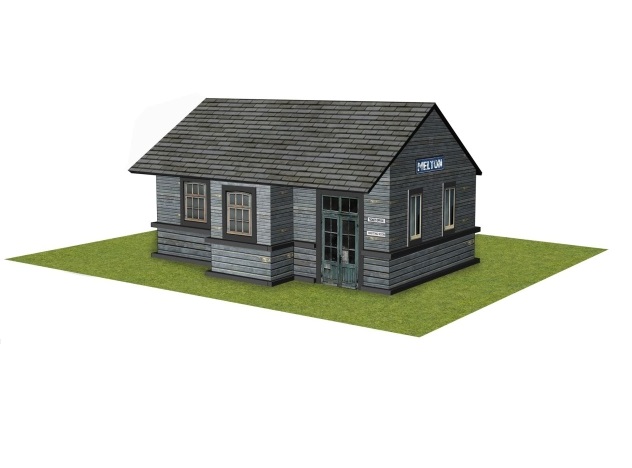 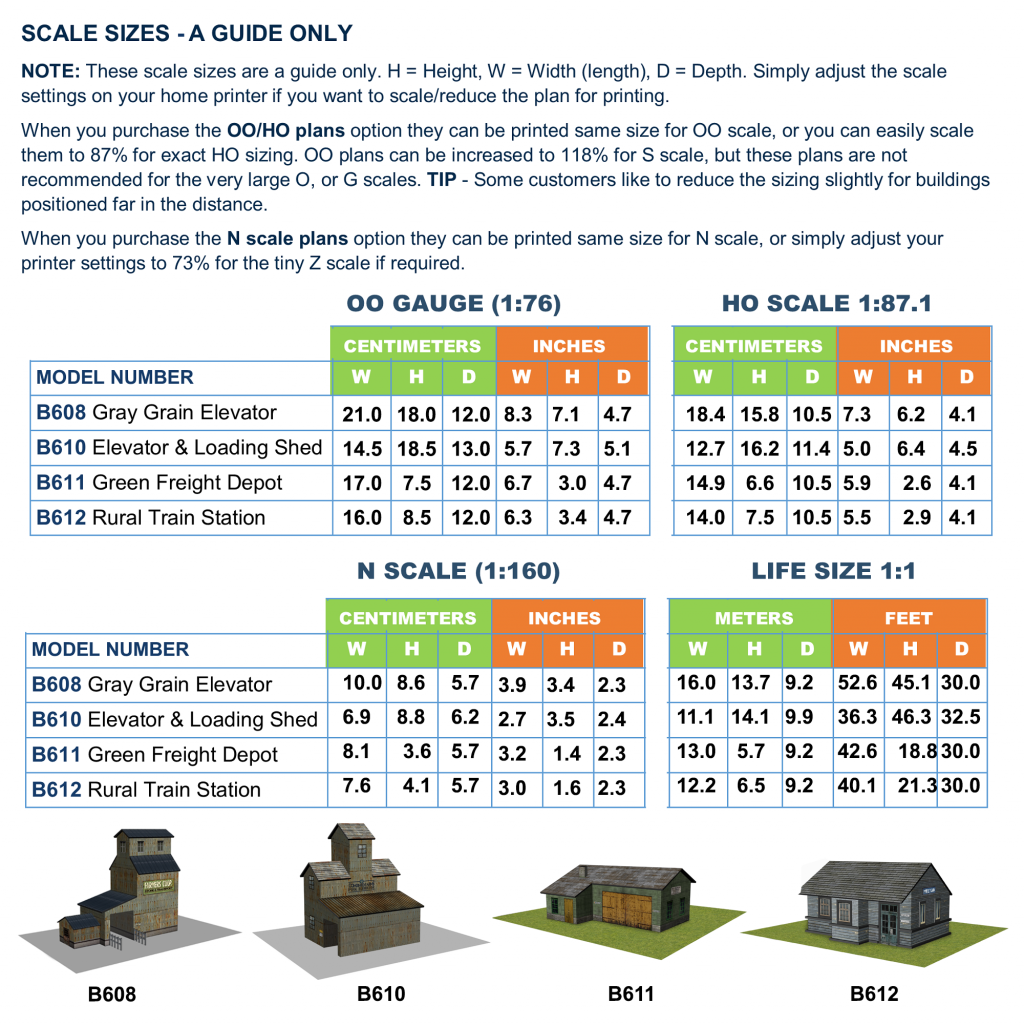 The plans for these model buildings are available by download direct to your computer in PDF format. When purchasing, simply select either from the OO/HO or N scale options. After purchase you will get access to the MY ACCOUNT area at the top of every web page where you can access your purchases for downloading the plans to your computer for future use. It’s really easy!

All plans advertised here can be purchased separately from this website or are on sale in money saving value packs which is by far the best value for money!

The plans include easy to follow numbered parts to assist with construction, and customers get access in their MY ACCOUNT area to a FREE Downloadable Construction Guide showing some helpful construction tips. There are also several helpful videos on this website to show how to make downloadable model buildings using cardboard and/or corflute. All plans are pre-weathered with high quality “photo-realistic” detailing.

You can now be reassured…
The Scale Models You Make Are Excellent Quality And Spectacularly Realistic…
Even If You Have Never Before Downloaded, Printed, Or Built Your Own Model Buildings!

Replicating A Real Life Rural Scene On Your Model Railroad

The key to adding authentic realism to any model railroad layout is to replicate true life scenes as closely as possible in miniature form. Rural scenes need animals, greenery, ponds or streams, fencing, some people, farm tracks or gravel roads, and structures of various kinds depending on the size of the scene being modeled. Farm buildings or structures used in farming operations can include sheds, barns, and dwellings to house families and farmhands, as well as outbuildings for storage, livestock, hay, fodder, tools, chemicals, machinery, grain and crops.

Naturally the scenery and structures would vary depending on the geographical region being modeled and the type of crops or animals being farmed. Going back in history, wheat was one of the first agricultural crops grown by European colonists in the US. In early colonial times wheat was not only a staple of life, but production became a large part of internal and foreign trade.

Prior to the advent of the grain elevator, the grain was mainly handled in bags as opposed to bulk storage and transport of loose grain. The advent of the Dart’s Elevator was a major innovation that revolutionized wheat production and storage. The system was invented by Joseph Dart, who was a merchant, with the help of Robert Dunbar, an engineer, back in 1842 and 1843 around Buffalo, New York. Based around the steam-powered flour mills invented by Oliver Evans, these two gentlemen invented the marine leg, which cleverly scooped loose grain up and out of ships hulls and elevating the grain to the top of a marine tower.

In earlier times most grain elevators were located near railroad lines, and until around the 1930’s they were owned by railroad companies, whereas today ownership is typically with a cooperative or in private hands.

The early style grain elevators and bins were typically constructed of cribbed or framed timber, and were naturally prone to fire damage. They were powered by animals whereas modern facilities are powered by internal-combustion engines, or electric motors. Also these days, grain-elevator bins, silos, and tanks, are generally constructed from steel and/or reinforced concrete. Bucket elevators are utilized to lift up grain to a consignor or distributor, from where it drops through conveyors and/or spouts into bins, tanks, or silos, in the facility. When full, the bins, silos, and tanks can be emptied using gravity flow, conveyors and sweep augers. As grain gets emptied from bins, silos, and tanks, it gets conveyed, sometimes blended, and weighted into railroad cars, trucks, or even on barges for shipment.

In most cases, a grain elevator refers to the entire elevator complex, which includes receiving and testing offices, any weighbridges, and storage facilities.

This series of scale model farm buildings not only includes a tall grain elevator complete with signage, as well as a loading shed, freight depot, and rural train station. The plans can be bought individually, or as a package deal showing a big saving in the price. These model railroad buildings can be made from cardstock ready for locating on a model railroad layout in HO scale, OO gauge or an N scale railway setup.